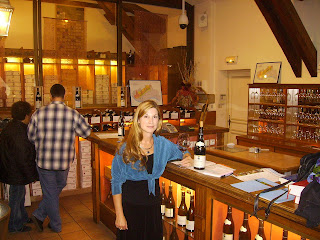 Sunday is a tough day in France because most everything is closed – even Auchan, the large supermarket. I slept in late – my first day to do so and didn’t leave my cozy apartment until 1:30. Heading north, I decided to find Guigal in Ampuis so I wouldn’t be late for my 9am Monday morning appointment. I was pleased to find I made the drive in 30 minutes taking the A6 through Lyons.
Ampuis was very charming and I drove up into the steep vineyards and took pictures of Cote Brune and Cote Blond (see Cote Rotie video). Since I had free time, I decided to drive the wine route from Ampuis through Condrieu, the tiny AOC of Ch. Grillet, and the vineyards of St. Joseph and Crozes-Hermitage, until I finally arrived in the twin towns of Tain and Tournon which is the heart of Hermitage. The complete drive took about 45 minutes, winding through charming little towns with the Rhone on one side and very steep vineyards on the other.
It wasn’t until I crossed the Rhone to the Tournon side that I could see the famous Hermitage hill with the small chapel. When I went to Chapoutier – which is amazingly open 7 days a week (as well as the Cave de Tain-l’Hermitage) – they told me the romantic story of the hermit who lived in the chapel on the hill was invented by the British for marketing purposes. They said the real French spelling was Ermitage, without the “h” and that is why they list their highly expensive single vineyards wines as “Ermitage” on the bottle instead of “Hermitage.” (At first I thought it was a typo!)
The visit to Chapoutier was lovely and I ran into 4 Californians there as well on vacation. They took the photo of me at the tasting bar. Chapoutier has a great display of all the soil types from the various appellations and it was easy to see the difference. All of their company owned vineyards are biodynamic, but they also source grapes from others. Like many of the larger houses they sell wines from both the Northern and Southern Rhone.
They have 5 different levels of wine. I focused my tasting on Hermitage, St. Joseph and Crozes-Hermitage. From the Fac&Spera collection, I had the 2004 De L’Oree which is a biodynamic marsanne with great intensity; and the 2005 St. Joseph Les Granits red and white. From the Prestige collection, I tried the 2005 red Hermitage La Sizeranne, which was my favorite and the one I bought, as well as the 2005 white Hermitage Chante-Alouette, which was exquisite, and the Crozes Hermitage Les Meysonniers 2006. I also had the 2005 white and red St. Joseph Deschants. This region is quite easy to understand, because all of the reds are Syrah and the whites are primarily Marsanne. They are allowed to use Roussane, but rarely do because it is difficult to grow. They explained the production and aging process to me, and I greatly enjoyed my visit.
On the way home I tried to have a light dinner in Touran, but as it was only 6pm all of the restaurants were closed. They said I could have a drink, but no food until 8pm. Therefore, I drove back to my Lyon suburb and had a quick dinner at a pub style restaurant – steak, fries, and a salad (not very French).
Professor Liz at 12:59:00 PM
Share