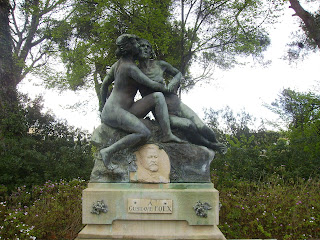 Last time I visited the University of Montpellier in July of 2006 to attend a wine conference, I encountered this intriguing statue. It depicts a younger woman holding and soothing an older woman. For days I kept asking people what it meant, but it wasn't until the last day that I found someone who knew the story of the statue.

It is a representation of France and America helping one another with viticulture. When France's vineyards were dying of phylloxera in the 1800's, America gave them American rootstock which is resistant to the disease. So the majority of France's vineyards were replanted on American rootstock with French clones. The older woman depicts France as ill and dying, whereas the younger woman illustrates America coming to help and sooth. It is a very touching story. The only piece that is left out is the fact that America was actually responsible for bringing phylloxera to France in the first place.

Regardless, I think it is a beautiful representation of the bond between France and the USA. There is a long history of love/hate between the two countries...but love seems to prevail. After all it was France who gave America the Statue of Liberty.
Professor Liz at 1:35:00 AM
Share